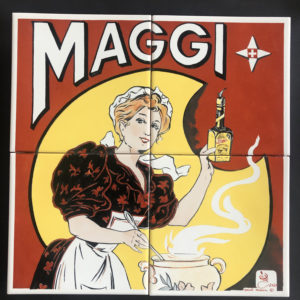 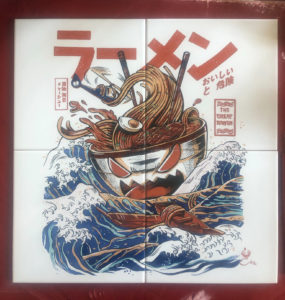 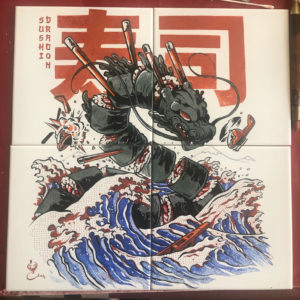 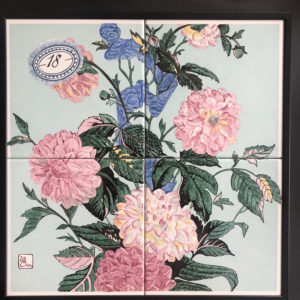 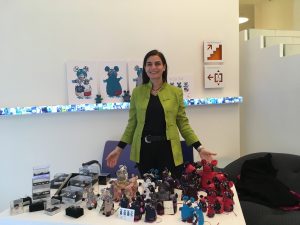 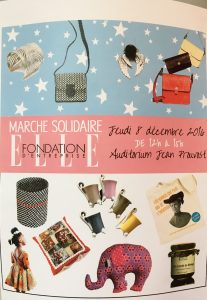 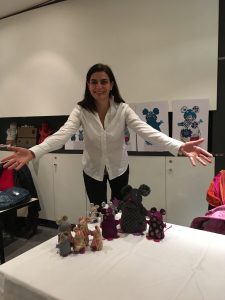 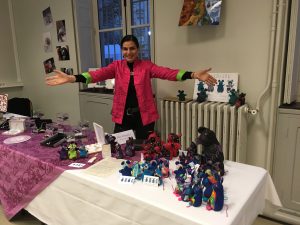 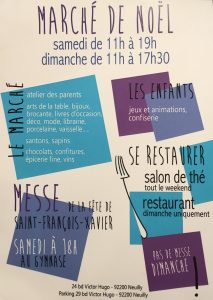 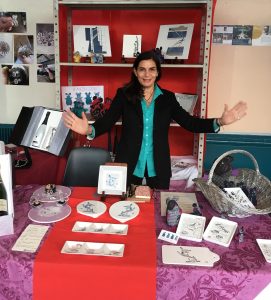 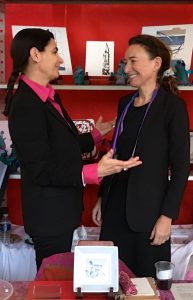 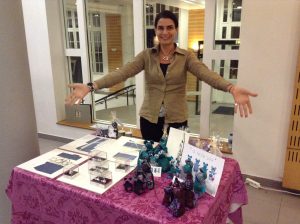 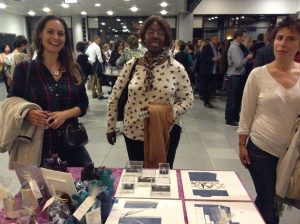 Florence Doumenc Roca: Life Of A French Artist In Japan

January 23rd, 2011 Florence Doumenc is a French porcelain painter and jewelry designer living in Japan with her family. She discusses with us her passion for the art and how she adapted to a totally new environment and still pursued her passion when she moved to Tokyo, Japan.

CelebrityDialogue: How and when did you move to Japan?
Florence: I first moved to Tokyo in 2000 following my husband who moved to Japan for his car company. I lived there for 6 years and then moved back to Paris, France for 2 years. I have been back to Tokyo since August, 2008 following my husband’s return.

CelebrityDialogue: What was your feeling when you set your foot for the first time on Japanese soil?
Florence: A strange feeling it was combining no fear of the unknown (It was my first time in Asia) and an impression of “déjà vu” as if I had been there before.

CelebrityDialogue: How, in your opinion, is Japan different from Europe?
Florence: Tokyo in particular is noisy. Everywhere you go there are sounds, traffic sounds, crows, yakimo and yuba vendors, trucks asking for your old appliances, Nationalists’ trucks yelling etc… Everyone is always on the move unlike Europe.

CelebrityDialogue: How did you overcome the communication gap in the beginning?
Florence: I always carried my pocket dictionary with me together with a little book containing useful sentences that could be useful in any situation. I sketched a lot to make myself understood!!

CelebrityDialogue: How and why did you learn porcelain painting?
Florence: I happened to exhibit my watercolor paintings in a municipal space where some porcelain painters were also exhibiting. Watching their work gave me the key to one of my searches: how to keep the transparency of the water coloring technique and being able to correct it like the oil painting technique when it gets too heavy . That’s the power of porcelain painting: always being able to correct it until you actually fire it up! I  learned many techniques from many different ateliers in Paris, in the Sevres manufacturing (I  used to  go back there on training during my first stay in Tokyo , as my teacher was the latest Meilleur Ouvriere de France – highest ranking artisan) and also in Tokyo and Imari.

CelebrityDialogue: How did you manage your time with children?
Florence: I painted after I dropped the children to school until I would pick them up after school (from roughly 9 AM to 2:30 PM). Then I would deal with their homework and dinner…and would start painting again after my husband would return and had dinner (that is, from 9:30 until I would feel tired ( 2 or 3 in the morning!) or finished my ( commissioned ) work!

CelebrityDialogue: What is the focus and style of your art?
Florence: It is to find an interesting combination of the  shape of  porcelain that I can buy.  Then I try to set the color and motifs so that all can be harmonious with food  and also can match  any other different container ( plate, bowl etc ) that would be set on the table together with my own pieces.

CelebrityDialogue: How did you learn to design jewelry?
Florence: I started making fresh water-pearl necklaces first for myself and then for friends and customers . Gradually, I  had to learn to become more and more professional. I had ideas but needed to work on how technically to give birth to those ideas. As I sold more and more, some people told me “you are not professional as you do not have a diploma”. So I went back to school in Paris, The”Boulle School” where I graduated as a Professional Jeweler after 2 years. I learned all the techniques ( jewelry designing and making stones , etc) and when I got back to Tokyo I looked for a school to keep learning techniques and acquiring the know-how . I believe I am on my way and probably will be walking on that way of learning jewelry designing the Japanese way until I die!!!

CelebrityDialogue: What is your artistic name? What does it mean?
Florence: Fleur d’Huytesa. It means Flower from Huytesa. Huytesa was a domain owned in ancient times by my husband’s family, so I heard. It is used by a branch of the family named Roca d’Huiteza but not ours. I liked the sound of Huytesa . As  I wanted to be reborn as an Artist, I decided to call myself Fleur (shorter than Florence but with the same root ) and to belong to an imaginary hidden garden somewhere between East and West , Paris and Tokyo,  I used Huytesa my with my own spelling so that I could feel it would be mine .

CelebrityDialogue: Where do you do most of your work? At home?
Florence: I make all my porcelain painting at home. I create my jewelry at home but use the facilities  ( machines, acid, fire) of 2 ateliers, one in Shibuya and one in Okachimachi, Tokyo city.

CelebrityDialogue: Do you exhibit your creations? Where?
Florence: I do exhibit my creations in Galleries I rent for the occasion or during  special events ( painting demonstrations, charity events, auction salons etc..).

CelebrityDialogue: Do you speak fluent Japanese now?
Florence: I have improved a lot! I follow classes in Japanese, I communicate with artisans in Japanese… and I can manage to make myself understood and understand what is going on around me! I wish I could read more!!

CelebrityDialogue: What is the best thing that you like about this country?
Florence: Its people: My Japanese mother (Noriko san), my “senseis” (used to refer to teachers in Japanese)! –Yukasan,  Shinjisan, Kikuchisan and my Japanese friends.

CelebrityDialogue: What is the biggest dream of your life? Or has it already been fulfilled?
Florence: I am a dreamer. I dream my life every day. I wish my dreams one day become reality…and I live happily ever after…

CelebrityDialogue: Thank you Florence. It was a pleasure.

Her ideas given life through encounters with people, artists in this country

Florence Roca, 45, is a French mother of three married to a fellow countryman who has lived on and off in Japan for 10 years. Aside from family, she has a passion for painting porcelain and making jewelry.

Her sensibilities, creativity and techniques were fostered and enriched by people she has met in Japan, she says.

Roca, who also goes by her artist name of Fleur d’Huytesa, came to Japan in 2000 when her husband was posted in the country as an executive of a major car manufacturer. At the time, she quit her job in France as a finance manager for a global pharmaceutical company, as the family had three children, aged 1, 3 and 6 — and also because she wanted to explore her artist possibilities here.

In addition, she says she wanted to interact with the Japanese society in ways many people in the expat community would normally not. That was a big challenge, however, because she didn’t speak a word of Japanese back then.

“I badly wanted to learn the language, as I wanted to experience Japan myself, not through books or papers, or anyone else’s previous experiment,” Roca said. “I wanted to meet people, get to know them and share some time with them.”

To learn the language, she needed to find someone to take care of her infant daughter during the day. Instead of hiring a nanny, as many expats do, she started looking for a day care center because she wanted to expose her daughter to the Japanese environment and wanted her to interact with local children. But finding such a facility was not easy at first, as spaces were limited and parents with full-time jobs were given priority, she said.

During her search, she met a woman who eventually became her “mother in Japan,” Roca said. Noriko Ikeda, then the director of a small, public day care facility in Chiyoda Ward, Tokyo, quickly saw her need for help and offered assistance, and even though there was a language barrier, the two could communicate through “the language of the heart.”

Later, after Ikeda retired, the two became good friends. Ikeda knew Roca was keen to learn Japanese-style ceramic art, and proposed the two take a trip together — and she made all the travel arrangements for the two to go to Kanazawa, Ishikawa Prefecture, the home of Kutani ceramics, and then later to the city of Imari in Saga Prefecture, which is famous for the Nabeshima-style ceramics.

It was during that second trip, in 2005, that Roca had her second important encounter in Japan — a prominent ceramic artist named Shinji Hataishi, she said.

On the day the two met at his factory in Imari, Hataishi was amused by her desire to learn enough to let her try painting a plate, even though she did not buy anything. Hataishi has since been helpful whenever she needed advice on her ceramic creations. The two — having come from totally different cultural and social backgrounds — can now talk about many things, driven by their shared passion for art and craftsmanship, Roca said.

“Of course the language — Japanese — is very difficult,” she said. “But when you share the same passion for something, somehow there is communication.”

What Roca appreciates the most is that, despite the gap in skills and experience between the two, Hataishi was always open to collaboration, she said.

“Shinji-san is a master, and I’m nowhere where he is,” she said at her home in Chiyoda Ward, where her ceramic creations and antique collections take up ample space. “He is absolutely fantastic. But he is not despising me. I’m doing my own stuff and he is like, ‘Oh, you did that? How did you do that?’ “

Roca often uses Japanese motifs such as ukiyo-e by Utagawa Hiroshige, Kitagawa Utamaro and Katsushika Hokusai, infusing her own sensibilities and ideas into them.

“It’s very close (to the original ukiyo-e) but the artist would have never done it like that,” she said, showing a leaf-shaped white plate with her version of Hokusai’s sketch of Sumida River in snow — in pink. Roca said she imagined putting green asparagus on the plate while she painted it.

“The proportion (of the drawings) is exactly the same but the touch is different. Also pink. You (normally) don’t use it that way.”

Another mentor is Takashi Kikuchi, who runs a jewelry-making atelier in Tokyo’s Okachimachi district. She was introduced to the craftsman about a year ago through a jewelry-making class she had taken, and he has agreed to let her use his studio whenever she needs to fire and hammer her creations — with no questions or money asked, she said, presumably because he understood her deep artistic motivation.

Through such experiences, Roca said she has realized that, in Japan, you can have an inspiring and fulfilling relationship with people without knowing or understanding everything about them. As an example, she cited a conversation she once had with the former day care director.

“One day I said in poor Japanese that there are so many things I want you to hear from me but I don’t know the words in Japanese so I can’t say,” she said. “My words were so poor and childish. Then she said, ‘Roca-san, I know what’s in your heart.’ And this was enough for me.”